an introvert,
not the type…..and yet,
she is the fuel,

be easy woman,
don’t force your lover
to guess.

no assaulting strangers,
they are everywhere –
find them where they live.

so old
her body…. her cage
she begs for peace.

girls didn’t leave home until the wedding in those days,
still,  Esther was bound for the city
watching the darkness gather outside the window,
her body relaxing as the train sped along,
the droning of the wheels lulling her,
she grasped the last bit of light ringing the horizon,
plucking an invisible flow of memories
streaming across her awareness, one by one,
she made a list – a gutsy plan,
not at all her usual routine.
she saw it as her only way out,
wondering, would her father see it her way ?

when she entered the hospital
walking under the old fashioned door frame,
Esther felt safe,
courting bravery until it became second nature,
her only wages were the tricks she gleaned
and the support she sought while she learned her art,
never mind failure, she threw all-night parties cramming
chemistry, anatomy, physiology, biology, psychology
and all those other ‘ologies into her mind
and her heart, bitten by this  virus,
and smitten by a strange desire to comfort.
much later, she wrapped herself in white
and fell in with a band of Nightingales.

In the time before dawn
the sky is another  country,
all purple and windy,
with a strand of pink haze
wrapped around the horizon,
embracing the morning star,
snuffing out her beauty
like a candle tilting in the bruised wind;

the gulls write their story
across the snow clouds,
their crying captures a word- juggler
in time’s lonely aspect
sustaining her in the warp and weft of the storm.

The poet planned an epic tale,
woven out of the fugue state of winter
sent by the devils of the night,
but her meager notes mention
only that the sky is still another country,
all  purple and windy,
even after dawn.

How is it possible that,
on a morning when the clouds,
curling back upon themselves,
and  giving up only momentary corridors of bare sky,
on a morning when those maddeningly small tokens of blue
taunt and tease a rain-weary,  fog-weary heart,
how, I ask again,
is it that the sighing wind,
bending toward the naked oak tree,
can carry a burst of bird song
through the myriad layers
of a morose winter morning,
piercing the frozen edges of  a january nap
prodding and poking me out of  my
january nest?

By what miracle does a Carolina wren,
the tiniest of wintering birds,
on the gloomiest of winter days,
sing in the only voice
the universe gave it,
an April voice,
conjuring up a stunning moment of spring,
and bestowing a blessing
on the rain besotted morning,
anointing my eyes and ears
with the chrism of its winter anthem,
just in time to save my dispirited soul
from the depths of winter silence?

Her whispering,
meant to poison,
will find a way to be heard,
with her infinite capacity to distort
the precise moment of my weakness,
pounding it with her fists full of words
and innuendos
into an altogether new creation
emitting a pulse of lies
with a sly rhythm I cannot bear
to witness again.

The invisible reality
is buried in the woods
some distance from her childhood home
and I must kneel in the soft loam
digging with my bare hands
until I hit the hard
edges of my own truth.

like a moth bending closer, closer
body, soul, essence lured to the fire
that warms and melts frozen heart sounds
these flames consume the remnants
of the restless child,
massaging the clay of resistance
softening and molding it
eroding a foolish need to escape the stillness

it seems a simple task
and yet……..
when is the heart ever ready
to embrace the kiln of eternity,
that wild yearning to awaken
to the holy breath of god?

eons ago,
when they were  younglings
they noticed one another,
blinking hard at their good luck
they were swept away
ripe and rolling,
seeing the hand of god
cleverly filling their basket
with stars and seashells.

in time, a nest
feathered with fledglings
weathers hail and firestone,
the walls never whispered
their flesh and bone secrets,
now the years are rudely slipping away
and all they can do is warm their hands
with the gentle flame of november
igniting indian summer –

a vibrant trail of wildflowers

a single sassy star above

I don’t know the meaning

though my life be long and hard

it will seem much too short

Notes on the process :

I felt like writing a love poem, perhaps because I had just read Pablo Neruda’s poem entitled ‘ Love,’ from which I borrowed the words ‘because of you,’ or perhaps for some other reason!  (It could be the wine)

I wrote this in three line verses,  perhaps because I can’t shift out of haiku mode.  Perhaps I will revisit this poem in the future and make it more like Neruda’s, or not! 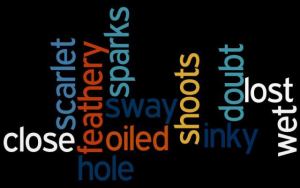 planting a tree- the hole too close to the house

lost in the woods 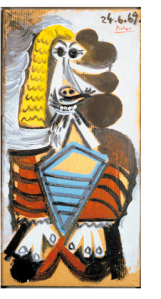 (The Seated Man  – inspiration for the first poem, this was painted by Picasso late in his life, when he was confined to a wheelchair)

Links to Resources and Favorite Publications

This is a list-in-progress, by no means complete.

Warp and Weft ~~Images and Words